WORLD
KABBALAH CONNECTIONS
The last Card of major Arcana is numbered at twenty-one, a combination of Moon and Sun, the nurturer and the life giver. On the Tree of Life World/ Saturn is placed on the joining path of Yesod and Malchut. This path is known as the Administrative Intelligence. This is the path on which the emanation of the entire tree is transmitted to the physical plane. The Hebrew name for card World 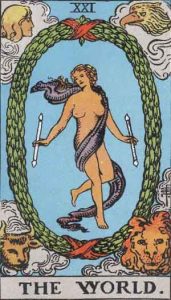 is Tav which means sign. Signature is a symbol of our acceptance and agreement with the decision taken or the order given. It is highly symbolic to the journey of Fool completion and the learning received. As a last card of tarot and as a student’s journey it also symbolizes the acceptance of the learning. The final signature.
SYMBOLISM
Most of the decks show woman dancing within a circle, her legs crossed (like those of the Hanged Man in the twelfth card). The circle is a wreath depicting protection, peace and the connecting spheres of life. She dances in an enclosed world suggesting the physical world but beyond the wreath she is floating into the universe, depicting the dancer interdependent. This is like a yogi present here but can be of another world. The dancer is an androgyne, symbolizing the culmination of male and female energies. One does not need to be a hermaphrodite in physical terms in order to reach the level of awareness depicted by World card.
For further reading please refer to my book ‘The Secret Bridge of Tarot and Astrology.” available on Kindle. It is also available in bookstores.