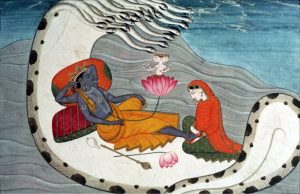 King Indra once humiliated Rishi Durvasa. Durvasa cursed King Indra,” all your splendour shall be destroyed. You will lose all your wealth.” With the loss of Indra’s luxuries, all the verdancy on the earth too started to wane. Goddess Laxmi does not reside in poverty and maleficence. She decided to go and stay in the abysmal depths of the sea. The demons attacked heaven and drove the gods out. Gods approached Lord Brahma who suggested them to pray to Lord Vishnu. After many celestial years of praying lord Vishnu appeared and promised to help them regain the splendour of all the four corners. He asked them to reconcile with the demons. He convinced the demons to work with gods and churn the ocean. He told them all they seek lies in the ocean. As the story goes the churning of the ocean brought out many divine blessing including the poison halahal, Kalpavriksha (the wishful tree) Dhanvantari with the urn of ambrosia known as amrita and many more gifts.
During the churning of the ocean goddess, Laxmi appeared from the ocean. Radiant as thousand moons, she shimmered with light of million stars. Her beauty and grace charmed gods and demons alike. Everyone clamoured for her, she was the ultimate wealth. However, Laxmi wanted something else. She glanced across the whole universe. She saw Vishnu. The omnipresent, preserver, ever powerful, unending, endless, masculine, blue-hued, tall Vishnu was the only one who was not affected by her. She realized that he was the one who had harnessed the power of the demon and gods, to churn the ocean effortlessly. He did not chase her. He brought her out of the self-hiding. He was a perfect choice. Goddess Laxmi chose Vishnu over everyone else.
Goddess Laxmi sits at the lotus feet of Lord Vishnu and rules the world as his consort. Laxmi stays with the one that is not carried away. She chooses discretion, balancing the positives and negatives, skill and good management. Imbibe the qualities of Lord Vishnu to have Goddess Laxmi reside in your house.
Happy Diwali