11 of May, 2022 No comments
Posted in Uncategorized 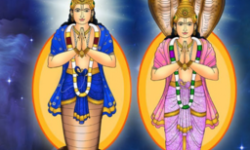 The snake has been worshiped in all cultures. The Egyptians made them a symbol of royalty and even wore them on the crown, in the Greek legends most famous story involving Draco tells that it was the dragon that Hercules defeated in order to possess the Golden Apples of Hesperides.  Hercules fought the snake, and even goes kills the multi-headed water serpentine in the constellation Hydra. The biblical reference of the snake, which manipulates and throws the man out of Garden of Eden, is well known.

In India, the Hindus have regarded the snake as the guardian of underground wealth and the keeper of the lowest levels of the universe. The Trinity Shiva has him wrapped round the neck, Shri Vishnu sleeps in the Annant Shesha in the cosmic ocean and the Lord Ganesh has him wrapped on his stomach In astrology the Shatras have called him the  Rahu and Ketu.The western astrologer name him as the north and south nodes of Moon and some call them the dragon`s head and dragon`s tail.

Between the two Rahu is very powerful. By nature he is malefic but can turn into the biggest benefic if placed well, but not without his intrinsic nature of Maya of which he is the master.

It is his illusionary power that makes the native going through his time that time is linear and not cyclic .that future will be better than the past.

The esoteric say that the world is going through the Aquarius age with the dominance of rahu. And the this can be verified by the fact that world products are ruled by plastic and glass that are soley signified by the Rahu and computers that are signified by Ketu and Mercury.

Can we imagine a world without plastic and glass…they are everywhere. Right from the mobile phone to televisions, computers, and glass that is almost used aplenty in new age buildings. Interestingly Rahu stands for foreign things, foreign culture,  the unorthodox, and out of box thinking. We can see the effects with new-age thinking, changing sexuality, new lifestyles ,fusion food, and much more.

Rahu is the head, imagination, desire and the very obsessive love for material life that millions chase.

Ketu is the tail, follower, spirituality, moksha, detachment and supports a contended life. He rules the Moola nakshatra and natives born under this constellation face financially tough times.

They form a 180-degree axis in the natal chart. with their three aspects , the placement including their house or the sign lord, they can anytime take over ten to twelve houses of the natal chart. And this is one of the strongest reasons why the mahadasha of Rahu with the antara of ketu or visa versa,or the antara of Rahu with the pratyantar of Ketu or vice versa can totally knock of the native.

They are the only duo that eclipses the luminaries. Their conjunction with Sun and Moon gives a grahan yoga and can block many positive energies related to the Sun and Moon.

This is not just an ordinary snake that wraps us in his tail, this is the mighty legendary, mythological, immortal serpent that churns the cosmic ocean in, and symbolically in his dasa he churns us.

His impact his difficult to deal with but the churning brings the amrita/ nectar of learning experience and life-changing events. If he is working on his higher energy and is forming yoga he can move mountains and place on the top but if he is not well placed he can thrash the native to the dust.

He brings in chaos misunderstandings and miscalculations of which he is born of, so to deal with him in his dasa is to pray to the goddess Sarasvati. She clears the clouds and bestows the naïve with peace of mind and higher intelligence to deal with all the turmoil the Rahu brings in.

Understating the planet and his role in the chart guides us to deal with him.

Prayers are the best methods as they not only remove obstacles ,they also reduce the bad karmic dues that we have to clear in this life.

To know more please watch the video on my youtube channel. Please click on the link below https://www.youtube.com/watch?v=MlzXSrx7-v0&ab_channel=MainaBhatnagar