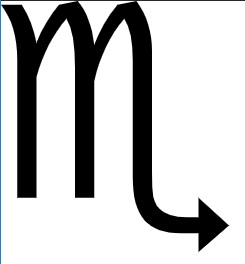 You can spot a Scorpio from a distance. This is a very obvious sign. The secret lies in the eyes. They are hooded, calm and controlled. If Moon is in Scorpio, you can put all your bets on this.
The Scorpio is a mystique, intelligent, fearless and fertile sign. This is a quiet sign, and quite opposite to the bubbly Aries. Mars has matured to his real form here. Remember if Mars is strong in a chart the native will not be dictated easily. He is aware of his strength and cannot be dominated. Scorpions are scorpions in some ways. Trust me, don’t try to bother them if you are not sure of yourself. You will be stung and you will get to know it later. Scorpion’s sting is very painful. They are very secretive and it may take you a life time to really get to know them. They are strong, dictatorial, have high energy and are blessed with youthfull looks. Mars owns this credit. They chose their words carefully and are non-interfering. Most of them earn wealth through hard work, are courageous and are self-made. They are very possessive, intense and emotional and can get very jealous in a relationship. If you are seeing a Scorpio better be clean and honest as they don’t know how to handle rejection.
They like to take part in public movements, play leadership roles in society, are successful in defence, surgery, medicine or police service. Scorpions have a number of enemies. This is because they are tough and speak their mind. They mostly rely on their own intelligence India`s Prime minster Mr Modi has the rising sign Scorpio in his natal chart. He is a very strong man and commands respect from world leaders. This is one of the strongest sign of the zodiac. Being the eighth house of the zodiac they have to face tough times in childhood. In appearance, they often are of middle stature, well-proportioned body and limbs, broad face, curly hair, and have a prominent chin.
The water sign is very intuitive Both the spinal cord and the scorpion refer to the concealed power which when rightly developed bestows tremendous power. Scorpio by itself is concerned with the arousal of the urge towards spiritual freedom. This is also a reason immense ability for the occult. The eight house of zodiac deals with the secrets and occult.
The eighth impulse to a great extent produces death for the individual enmeshed in the matter, but with the death of the material nature is the birth of the cosmic man and universal consciousness. Esoterically under the Scorpio impulse, the cosmic man struggles to arise from the material debris where he has been buried to begin his resurrection.
Fortunate during the age of 29 to 45.
Artist Pablo Picasso, actress Whoopi Goldberg, and late prime minister Indira Gandhi are few examples of Scorpio.